WHAT HAPPENED ON ATTEMPT 1?

As of writing, I still have not written any articles about my experience on the Pennine Way Late August 2020 so I best do a summary of that before I proceed on my 2021 writing. Let’s start with Day 1. Myself and Dave arrived at Edale around 10am, dropped off only 10 meters from the starting gate. We set off in good spirits, finding Kinder in low cloud as usual. Descending from Kinder the heavens truly opened and we were caught in a seriously severe downpour as we traipsed along the flags at Mill Hill to Featherbed moss where the flags were flooded in some 4 inches of water. I saw on Facebook that Abi (blog here) a PW wayfarer sharing the same schedule as us, was approximately an hour behind us and found herself unable to cross the flash flood of Kinder Downfall. I was amazed to see her picture of the now river like water that only an hour previously we had passed with ease. The heavy rain continued as we ascended Bleaklow, with large sections completely flooded with the swollen streams. I strongly suspect that this initial rain is what caused my downfall (kinder downfall haha).

The weather cleared up after summiting Bleaklow and we made our way along the Torside Diversion before ascending the Crowden Valley. The campsite in Crowden was closed due to Covid which is quite the problem for many walkers. You could either camp short on Bleaklow, chance it in the woods around Torside or ascend the Crowden Valley as we did. This would prove to be a hard option and it was dark by the time we found a suitable pitch around Laddow Rocks. Exhausted, we crammed some food and slept. 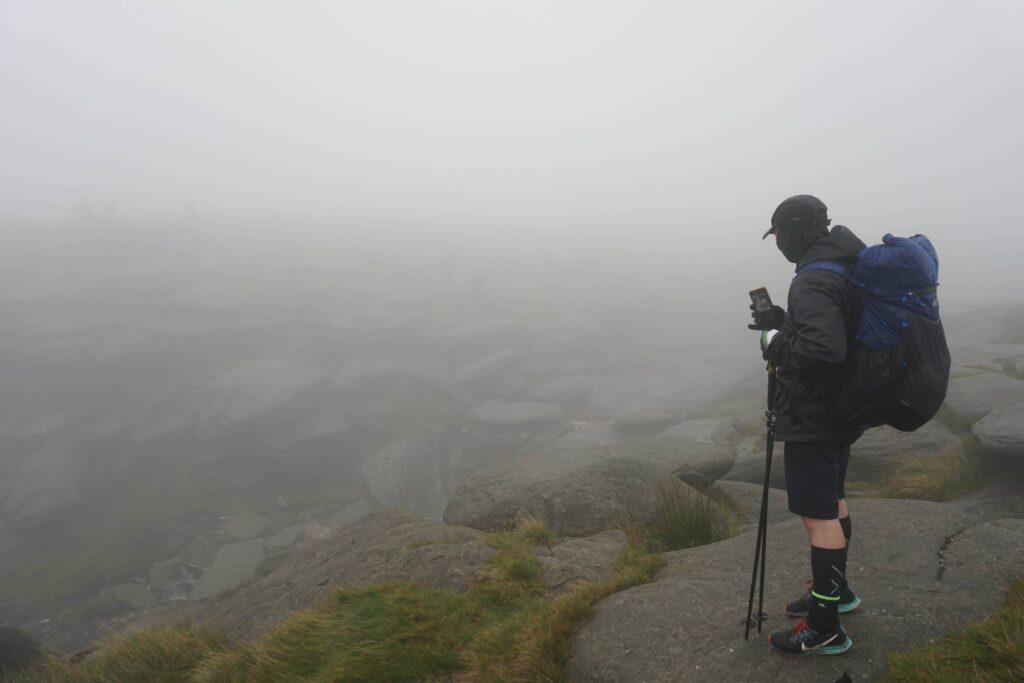 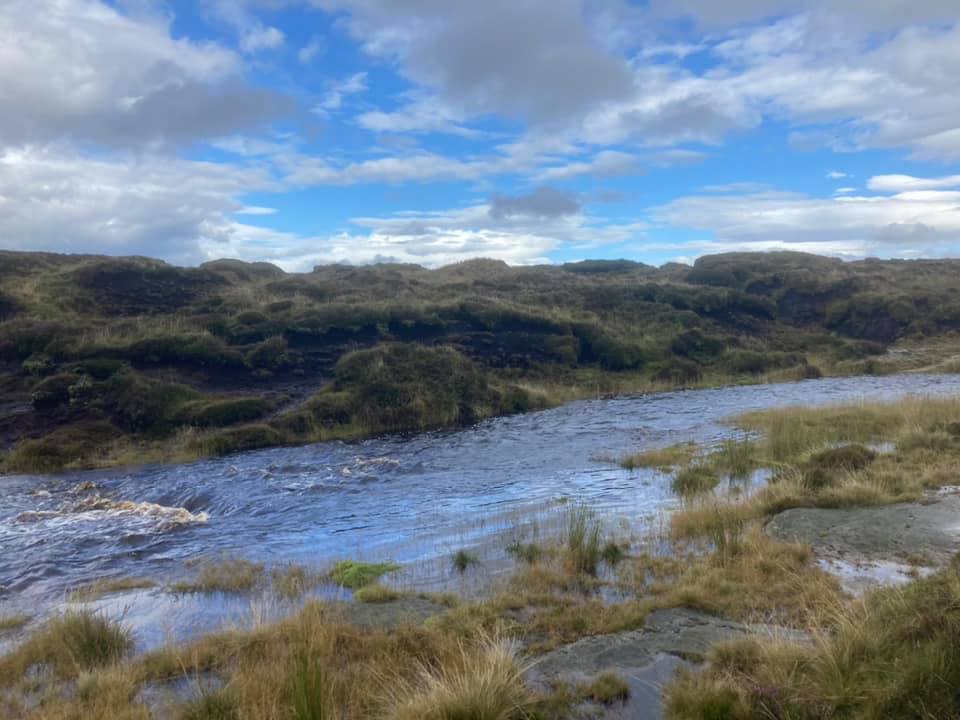 Day 2, we set off in earnest to Black Hill, finding the paths flooded in sections and the stream crossings difficult. Dave dropped his walking pole in one of the larger crossings and we both had to exert some considerable effort to keep up with it fast disappearing down stream. We summited Black Hill and continued to the holy grail of the promised snack van. We could see a mid sized white object parked up, we were in luck we thought. Alas, we were deceived, for the snack van was actually an unusual small tanker. My spirits on day 2 were very low and I was fortunate to be walking with Dave who definitely kept me going as we made our way to Standedge. We arrived at the camp site behind the Carriage House Inn (no longer an Inn but private luxury accommodation) where the occupants tend to make use of their hot-tubs and music till the early hours. The campsite minder was not there but we were assured by a man in a caravan that we could stay. The manager never did show up so we never paid I’m afraid. One day I will return and settle our debt. The hot shower was very much welcomed. 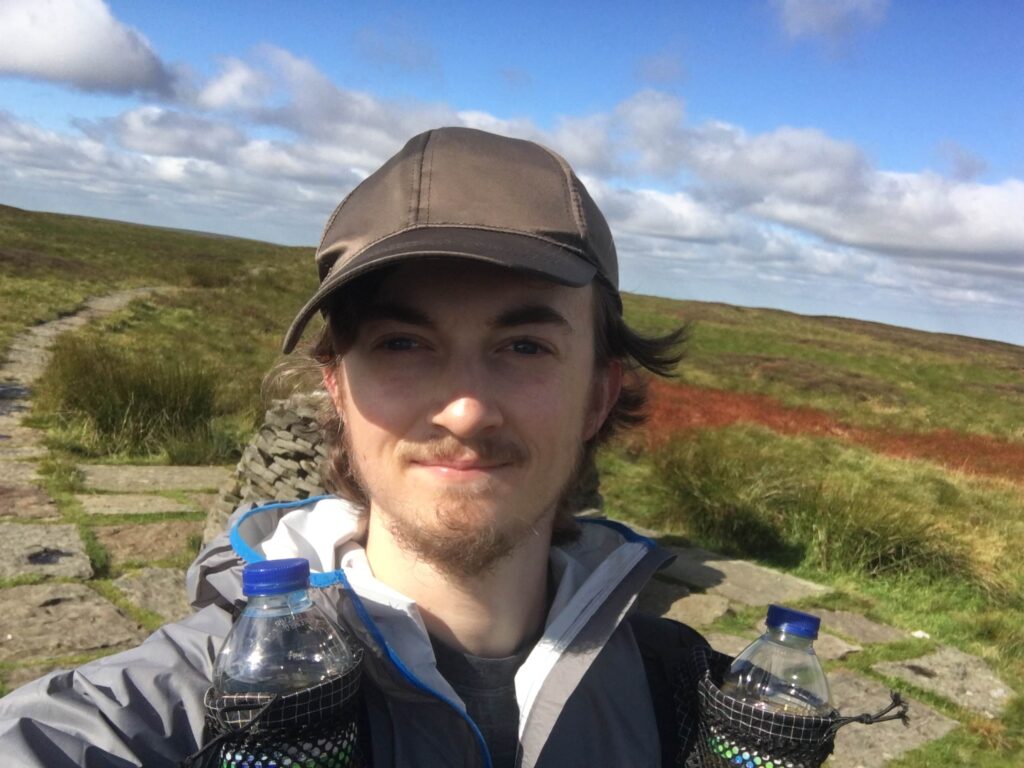 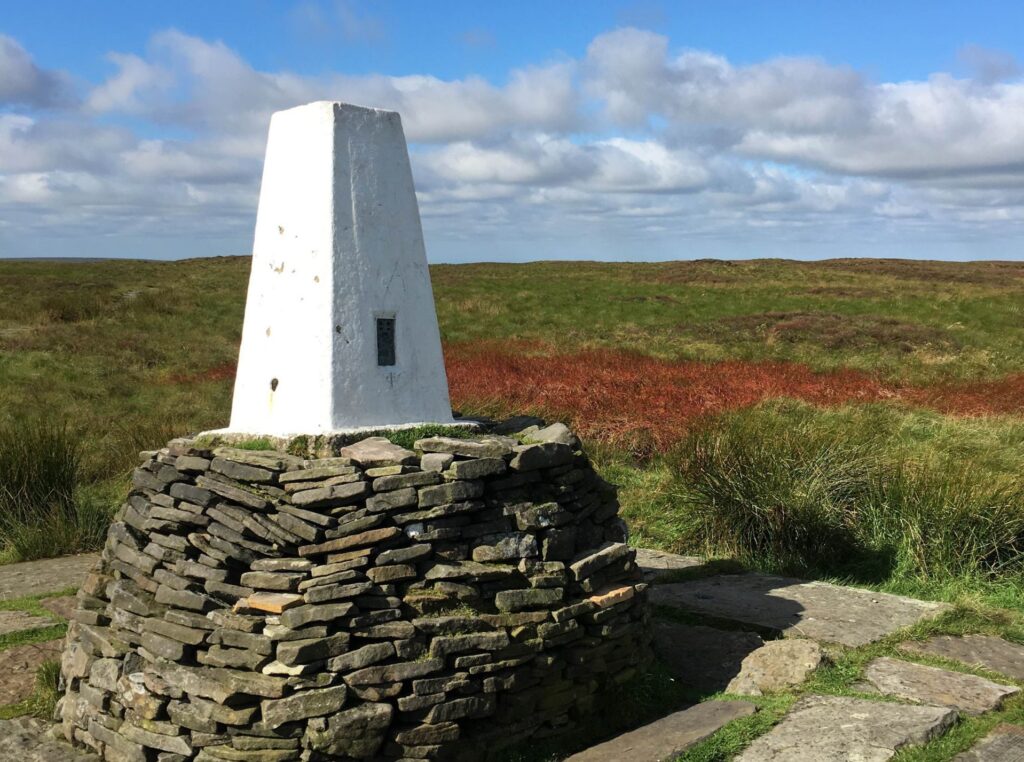 I was awoken, (false. I was already very awake) by Dave calling for a team crisis meeting in the toilets. We dashed through the rain to the shelter and exchanged our worries about the day ahead. We knew we would be traversing a number of exposed edges that day where shelter would be hard to find. There was another named storm coming in that day with lightning and thunder on all the weather reports we could find. I won’t lie, we were actually quite fearful of the day ahead. In the end, being quite close to home, we called for a tactical evacuation and escaped the Pennine Way for a day. Charlie and Abi both pressed on through the storm, I believe the promised thunder and lightning did not show itself in the end. The next day we were dropped off, all freshly dried, at May’s shop, skipping the section we had missed due to our tight schedule.

Day 4. A great day this was. We set off from May’s and made our way towards Top Withens, we could see the landscape changing and this filled us with enthusiasm and energy. Being from Yorkshire myself and already knowing the landscape around Haworth well, I must have felt at home. We passed Abi having lunch at Top Withins and continued down to Ponden before up and over Ickornshaw moor. From the raised moorland we caught glimpses of much larger hills in the distance. A sure sign that we were on our way to the Dales. A great feeling. The descent from Ickornshaw was very boggy indeed and our shoes and socks were wet once more. We arrived at Squirrel Wood campsite. A famous stop on the Pennine Way, a very special place. We ate pizza, drank beer, listened to stories in the warmth of cabin and experienced live music from Ady and Charlie. This was the first time we had met Charlie, a great young guy of a similar age to me. He seemed very carefree, navigating with his guidebook and carrying a very large backpack. Ultimately, he made it to the end and I was very pleased for him and Abi upon reading their arrivals at Kirk Yetholm.

I think I made two mistakes at Squirrel Wood. First was staying up too late and second was staying for breakfast (not that it was not good, quite the opposite.) Day 5 is quite a sizeable trek to Malham but we stayed for breakfast which inevitably means your departure time is much later than if you did not. In my second attempt I would ideally stay in the bunk house (so I save time on packing the tent away) and get an early start to Gargrave where I could get a good lunch and re-supply before continuing to Malham. 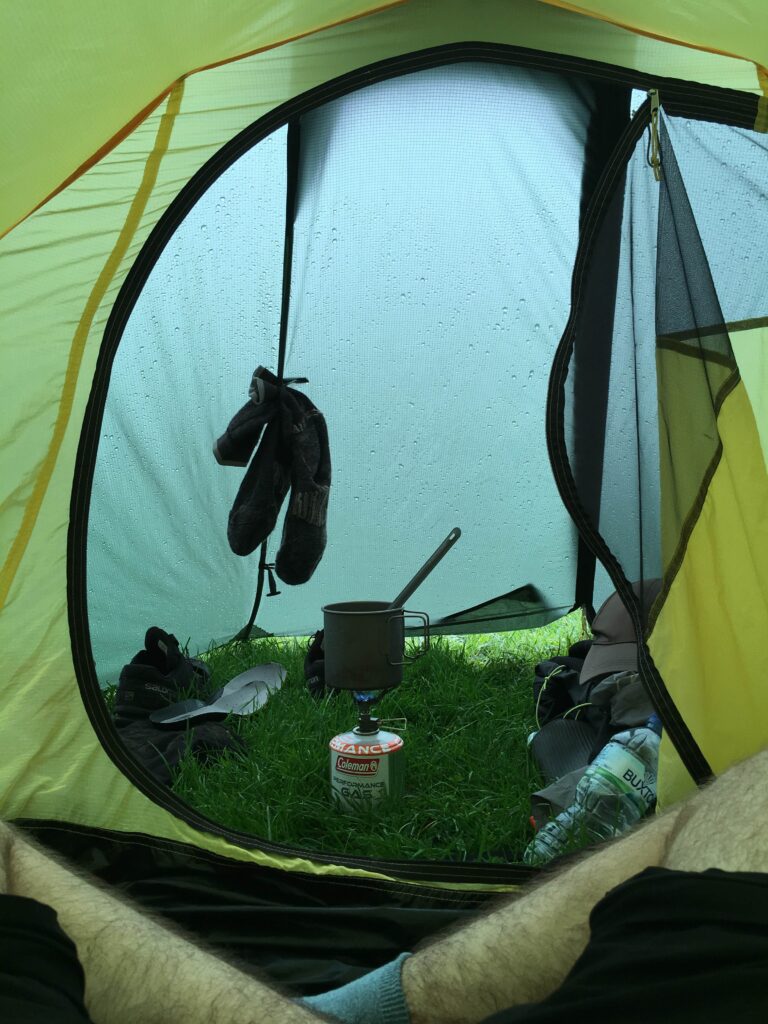 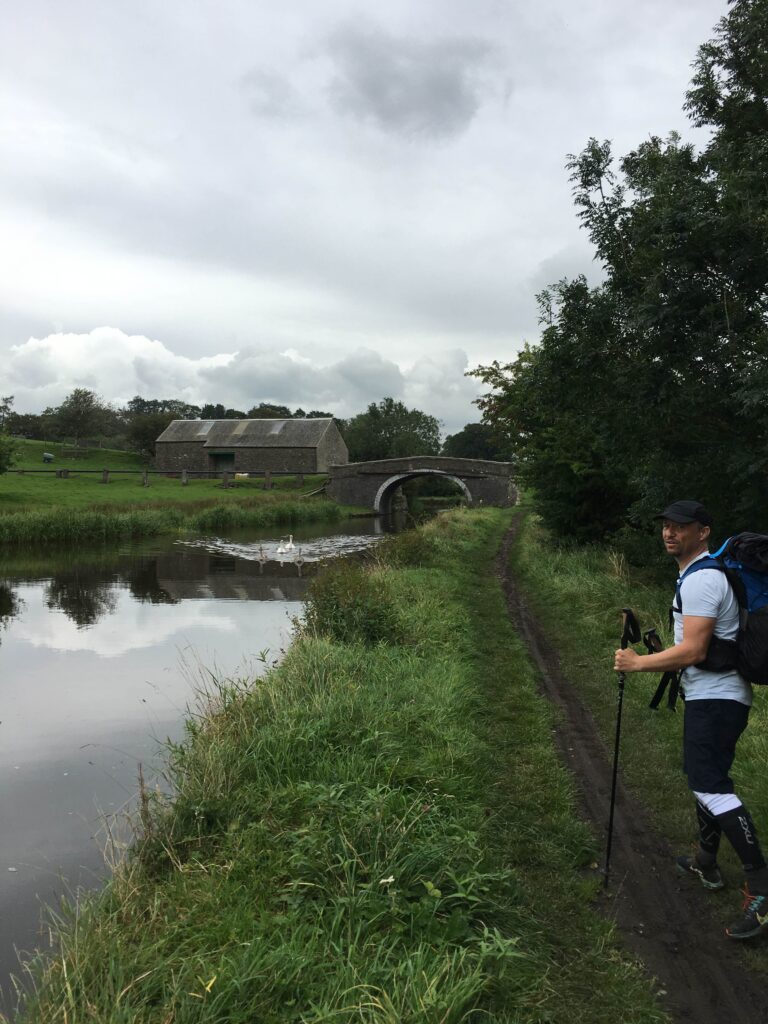 Day 6. Another crisis meeting the night before. Dave was injured and had made the decision to retire from the Pennine Way. Of course I was disappointed that he would not be able to continue but I fully understood. All that there was left to do was pay my respects to my fallen comrade and raid his supplies of crisps, chocolate and camping gas before I left him. It was strange to be leaving him as I set off for Malham Cove. Dave had been a real good walking partner, keeping my spirits up when I was low and always having something to talk rubbish about. On the steps up to the top of the Cove there is a poster on a gate for the Samaritans – “Whatever you are going through, we are here to talk”. This exists here because of the sad fact that there have been suicides and a number of deaths at the cove. As tragic as that is, I had a fleeting thought of a Pennine Way walker phoning them and going through the tragic series of events that have led them to hiking the Pennine Way.

Being on my own I actually found myself in good spirits. I made good time around the tarn, stopping on the bench to repair my failing feet, I’ll get onto that shortly. I summitted fountains fell at 10:30 in very good spirits but found it too cold to stop for any more than a few minutes. I hurried down the other side, Pen-y-ghent fixated in my vision. A tremendous wind was blowing on Pen-y-ghent and I only rested a few minutes at the summit before almost jogging down to Horton. To my dismay I found myself at Horton campsite on a bank holiday. It was seriously packed by evening. I had a great dinner with Charlie in the pub next door. He made me laugh, strolling into the campsite his first words were “Pub?”. Of course the only response from me could be a nod and a reiteration of “Pub.”. 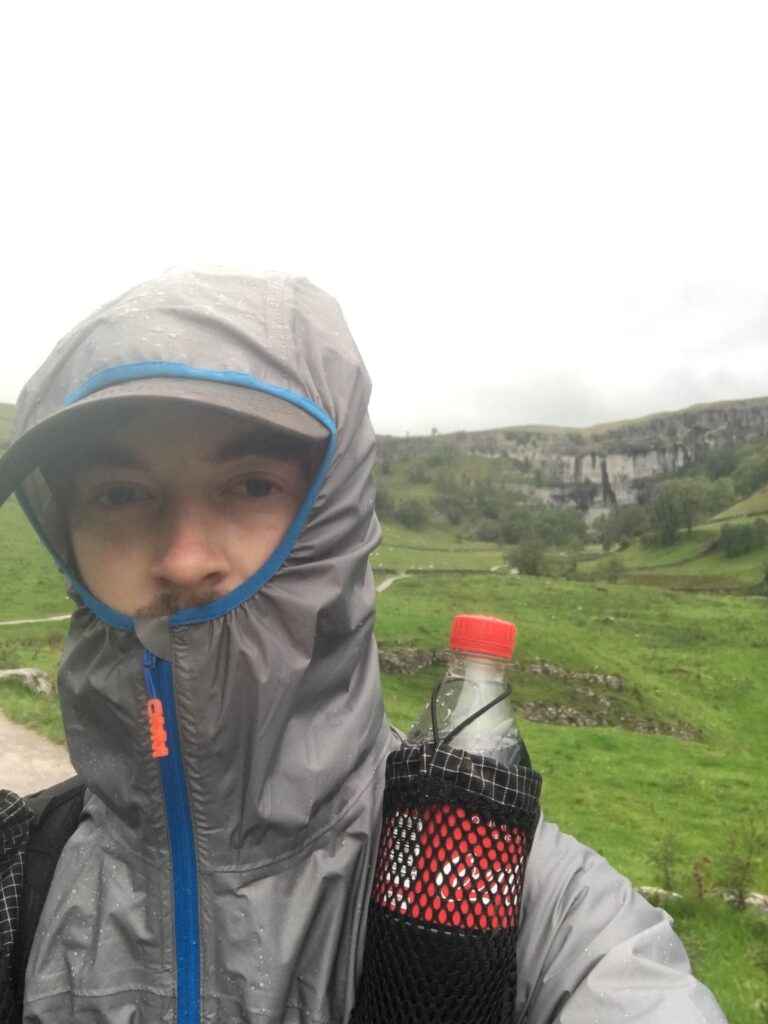 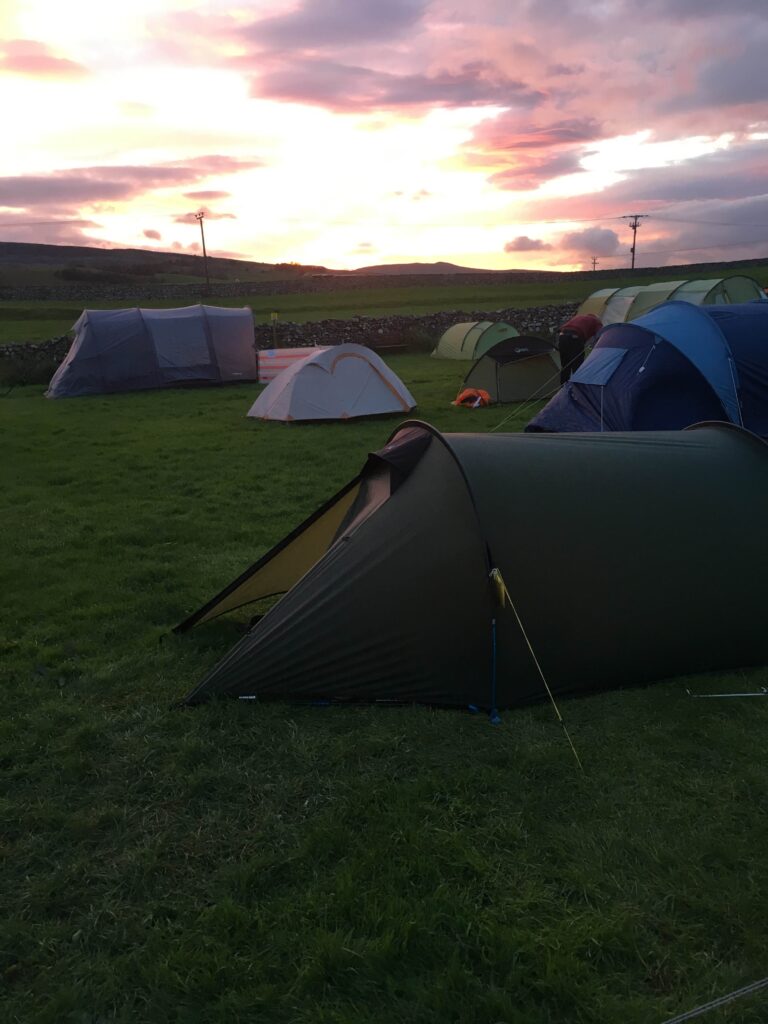 Day 7. Another early start for me as I made my way to Hawes. This was not a brilliant day, I found the scenery a bit dull, although the valley on your left when on the high road is truly excellent. It was also a very cold day and I found myself hiking in my down coat. I stopped frequently to repair my foot, now fairing quite badly. Looking down on Hawes I made the decision that enough was enough for me. I found that my uncle and partner were staying in Hawes that weekend and they had just checked in to the Green Dragon. Mustering my final breaths on the Pennine Way I tracked them down and spent a few hours outside a pub while I awaited my rescue evacuation. Charlie and Abi spotted me outside the pub and I bade them both farewell promising to return.

So what was the issue? I awoke on the second day with pain along the tendon that runs along the top of my left foot. It was quite painful at times. Over the next few days it remained painful until I discovered that if I removed my sole, it had enough space in it’s swollen state to be pain free. However, it was a double edged sword. A couple of days with no sole and the extra space in other areas had created a multitude of blisters! On the final day to Hawes, the tendon pain came back and my blisters were raw. My body was trying to protect itself and clearly I was walking funny, developing a pain in my ankle. This was the final straw for me. 3 issues in the same body part. It was hurting and I knew there was not much I could do for it. So what caused the tendon pain? I believe it was on day 1. I tightened my shoe too tight while wearing water proof socks. Over the day my socks swelled with all the water, pressing on the tendon and ultimately sealing my fate from the beginning. A lesson learned. 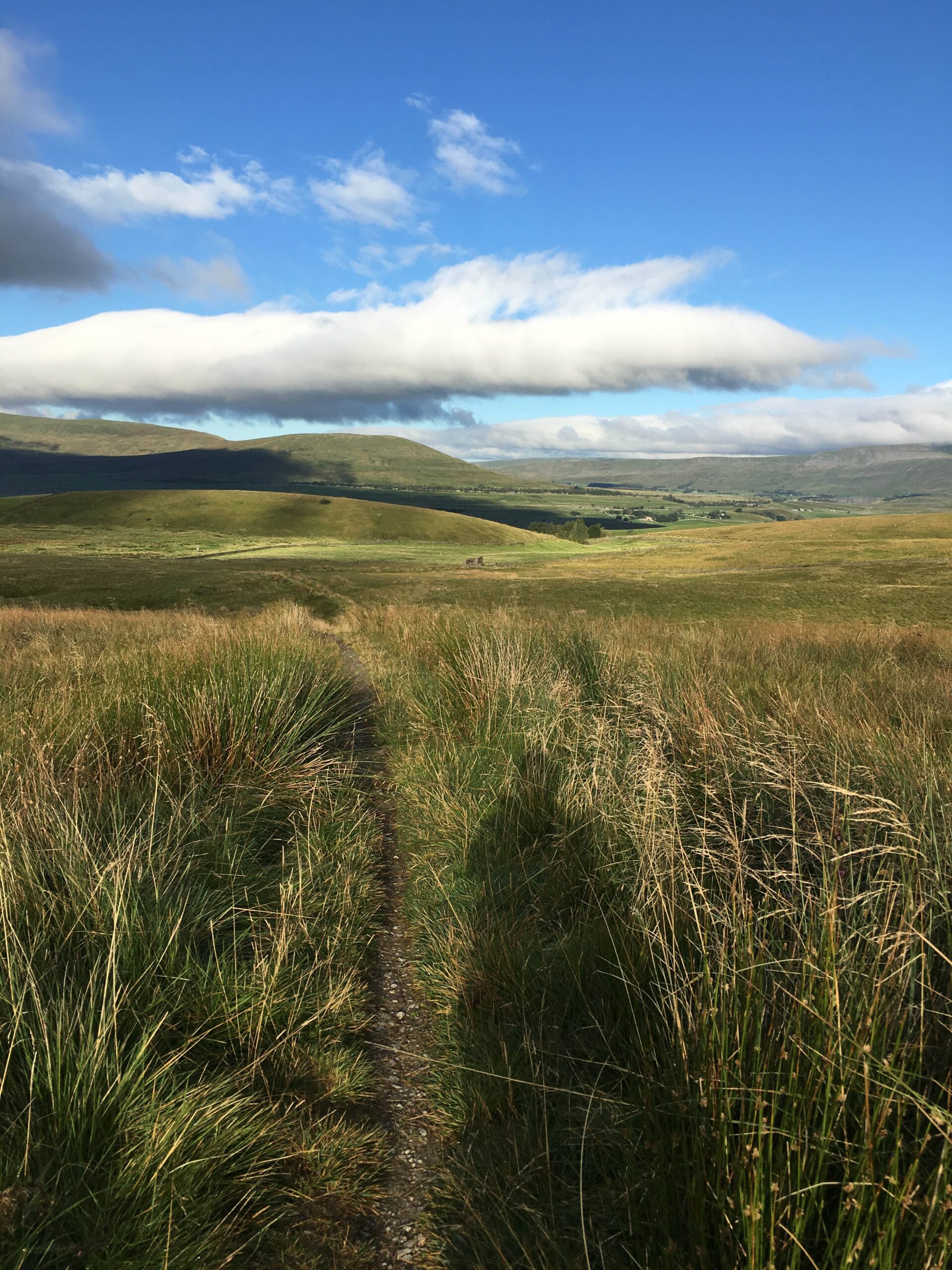 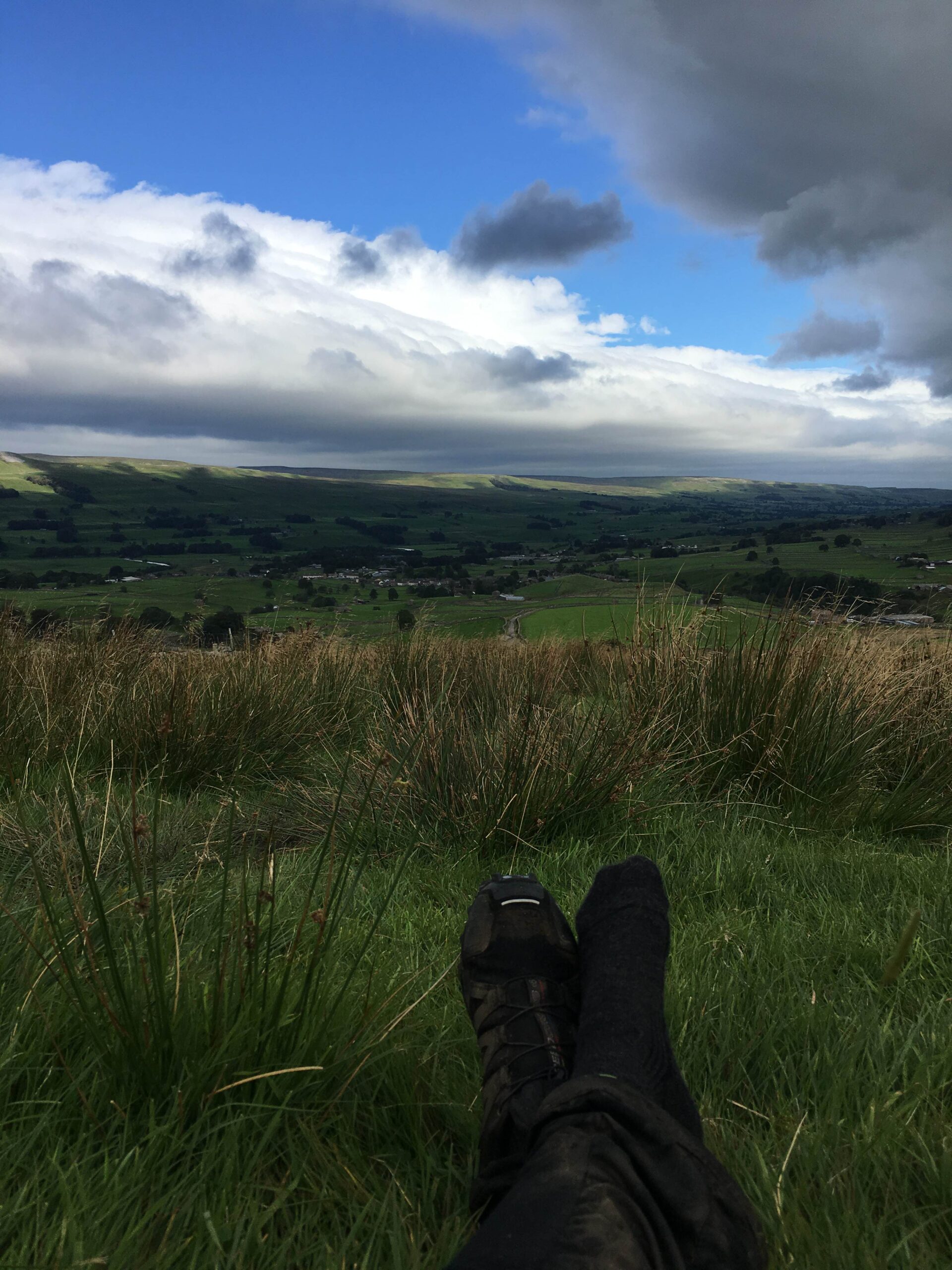